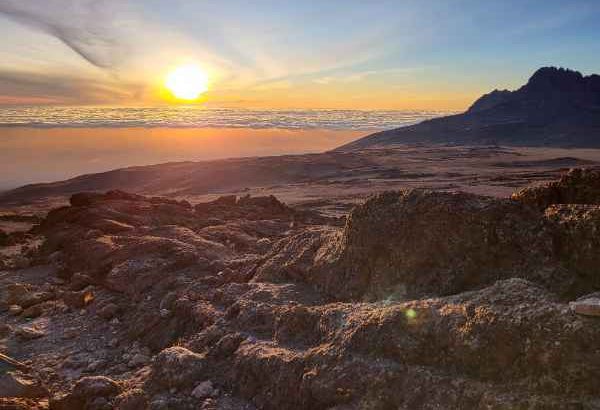 By Joan Koehne, Wonder Writer at Writer to the Rescue

We did something big this month – as in 19,341 feet Mount Kilimanjaro big. It’s hard to top that! (Pun intended.) I use the word “we” loosely. Bill climbed Mount Kilimanjaro while I remained in Abrams at a ridiculously low elevation of 696 feet. I may not have spent eight days climbing a mountain, but I was there in spirit. You see, Bill carried my mini-me Wonder Writer action figure to the summit to remind him of my support and to snap some rare photos of Wonder Writer soaring above the clouds.

Do you have what it takes to climb Kilimanjaro?

For those who don’t live with a mountain climbing fanatic like I do, let me tell you a little about the amazing feat Bill achieved. On July 6, Bill departed O’Hare Airport and on July 7, arrived at Kilimanjaro International Airport 8,000 miles away. Mount Kilimanjaro actually is a dormant volcano and has three volcanic cones. Located in Tanzania in eastern Africa, Kilimanjaro is the highest mountain in Africa. It’s higher than any mountain peak in the U.S. with the exception of Mount McKinley in Alaska. Although Mount Kilimanjaro isn’t a steep climb, summiting the mountain is extremely difficult. Here are a few reasons:

Acclimate to the high altitude

Bill’s group of seven climbed four days before spending two nights at 14,117 feet to let their bodies adjust to the elevation. The next day, they hiked to high camp, called the School Hut, at 15,518 feet to prepare for the summit the following day. One night, Bill’s blood oxygen level fell to 81 percent, which was a concern because levels under 80 end a hiker’s climb. Fortunately, Bill rebounded to an acceptable 93% the following day.

For someone like Bill who detests Wisconsin winters, tenting in 15-degree temps is really uncomfortable. When you add in the rain and the wind, the mountain becomes even more inhospitable. With a sleeping bag liner and hand warmers tucked inside his mummy-shaped sleeping bag, he made the best of it.

The group started the day at 3am and ended the day 11 hours, 20 minutes later. First, they climbed to Gilman’s Point to see extraordinary views from the crater rim at 18,640 feet. After two more hours of hiking, they reached the summit of Uhura Peak at 19,341 feet. You’d never guess what Bill carried to the summit. Because the porters carried his pack, he carried something belonging to his mountain climbing guide – a ukulele in its case. Why a ukulele? His guide Ricardo, a musician, wanted to record a song on at the mountain top. Unbelievable!

Make it home safe and sound

Bill returned home on July 17 after this trip of a lifetime. Wonder Writer made it home, too, with a little volcanic dust on her costume but otherwise in good shape.

Bill has had some incredible experiences hiking and climbing in Hawaii, Colorado, France, and Spain. In July 2022, he added Mount Kilimanjaro to his list of accomplishments. I’m amazed by each one! Now when Bill tells me he wants to climb something or hike something, I take him seriously. How does he do it? He tells me it’s as simple as putting one foot in front of the other.

Get Our Blog Feed For Your RSS Reader
https://packerlandwebsites.com/feed/